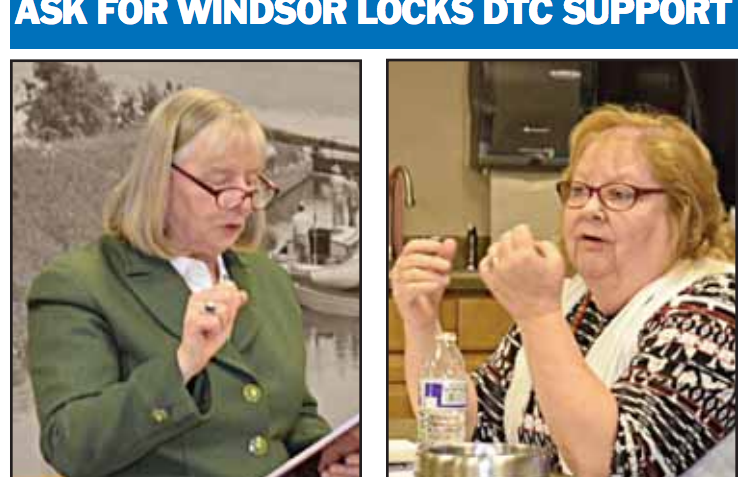 From the Windsor Journal 4/28/18, written by John Karas 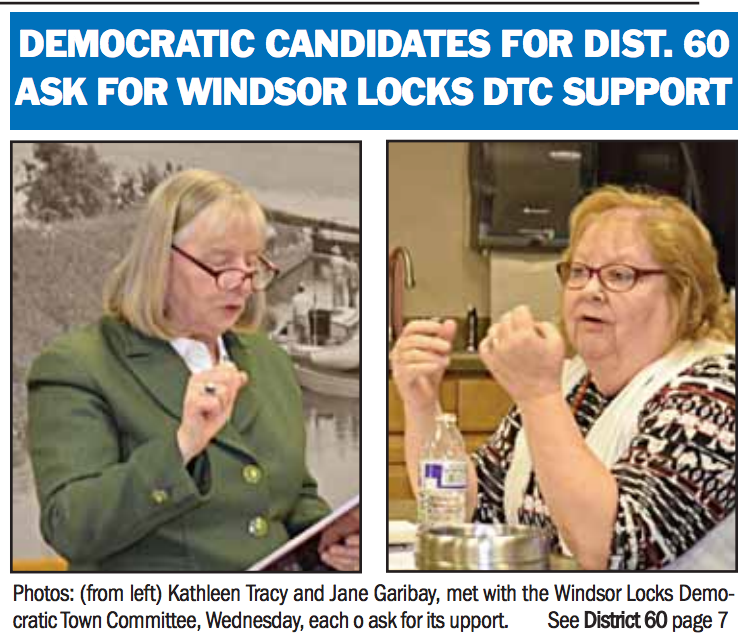 The two announced Democratic candidates for the seat of the Connecticut House of Representatives District 60, now occupied by Republican Scott Storms, met with the Windsor Locks Democratic Town Committee, Wednesday, to ask for the support of the 6 delegates Windsor Locks is sending to the District Convention next month. Jane Garibay and Kathleen Tracy argued their cases to the group, and the DTC that included Town Selectman Chris Kervic and one of the most seasoned politicians in Connecticut, Peggy Sayers, had
a chance to weigh the merits of the two campaigns – which, as became obvious, reflect very different worldviews.

Tracy, who told the group that she is no politician and wants to see fresh voices in the Capitol, told them that one of the reasons she runs is the problems she discovered during the four years she home-cared her mother and she listed some of her priorities. “We have to restructure our tax system to make it more fair and equitable for all,” she said. “As a retired educator, I hope to lend my voice to legislation that will bring high quality education to all students. Our juvenile court system is also in dire need of reform, and I have some ideas on that subject as well.”

In healthcare, Tracy believes that the state should use its clout to offer – not mandate, she stressed – to small businesses a livable health care solution. And she advocated increased home-care as a way to enhance the health system. Sayers, who has worked in the health care systems for decades and has her name attached to a number of bills had a quick response: We have researched that, she pointed out, and the costs would be much higher. How are you going to pay for that? Tracy answered that a way to find funds is by eliminating corruption and inefficiencies (presumably in the state bureaucracy) but she declined to identify either when former Selectman Joe Calsetta asked her to explain.

Garibay told the DTC that being a politician is not a dirty word for her – it’s someone who wants to serve his friends and neighbors. What really concerns her, she related, is the economic situation the state is now in. “There are many issues facing us in the future,” she said. “One is the budget, and it’s one of the biggest ones in my mind. What I hope to bring to the legislature from Windsor, Windsor Locks is common sense. When I think of a budget, I think of my household budget. How would you balance your budget at home, if your hours were cut at work, or your salary was cut?” she asked. One of those in attendance joked “Just keep borrowing more,” but Garibay had none of that. “If it was my household, I would start to look at what I could cut,” she answered her question. I might not buy a new cellphone, I might get rid of cable, I might keep the temperature down to 65 – although my husband already does that. But you would look for savings that didn’t affect your children’s healthcare, they wouldn’t affect food, the roof over your head, but you would cut that budget sensibly, and I believe the same thing can happen at the state.”

Beyond cutting expenditures, Garibay stressed that it’s
time for the state to start using the taxes it collects for the purposes it collects them for. “When we are taxing something
– like the casino tax – that should go really to education,”
she noted. “If we decide to do tolls, that money has to go for
infrastructure. If we promise what we will do taxes, and why
we are levying them, that’s where they have to go.”
Garibay said that, quoting a respected former Windsor
School Superintendent, Betty Feser, “We have to do what’s
reasonable – we have to support our kids.”

Garibay has an experience in the problems and opportunities
businesses face in the state, and she put a lot of emphasis in this – like supporting investing in transportation infrastructure
that will help businesses grow. “I see Windsor Locks is already on the ball with the transit orient development – because if we want to attract businesses, we have to have the proper infrastructure in place,” she noted.

She also pointed out that big businesses like the ones on International Drive and Day
Hill Road help not only with their taxes, but also with their
community involvement. As for small businesses, she
hopes to work in supporting them. “Small businesses are our
souls,” she said. “If we lose our mom-and-pops shops, our little restaurants, are we all going to go to the big chains? A few years ago the Windsor Chamber of Commerce did a survey of just the small businesses – those with under 50 employees. We tallied up their contributions: more than $60,000 was given to the Windsor community by those businesses in donations in goods and services, and funds. Little League, your civic groups, all your organizations in town benefit from those businesses. It’s not just the big corporate.”

Commenting on the $15-an hour movement, she said that
she wants more: “I want to see partnerships between large companies like United Technologies, Electric Boat and the community colleges, in training kids that aren’t off to college to earn a living wage, she said. “It’s not just putting up the minimum wage – it’s bringing in jobs that can help support a family – because even $15 an hour cannot support a family.”
Garibay said that if she is the nominee of her party, she will bring to the House what her voters really want. “I promise you I will always listen to your opinions, hold chat sessions, meet with you and more,” she said. “I will work with you to build consensus. But I will not be afraid to fight for what is good for
Windsor and Windsor Locks.”

Tracy said that she wants the party to have a strong candidate against Storms, and she intends to fight for that until August – implying that even if she is not the endorsed candidate the two town Democratic Town Committees, she will primary for the position. The District 60 Convention will be held on May 14, and there are 14 delegates the two candidates hope to entice – 8 from Windsor, 6 from Windsor Locks. Stay tuned.