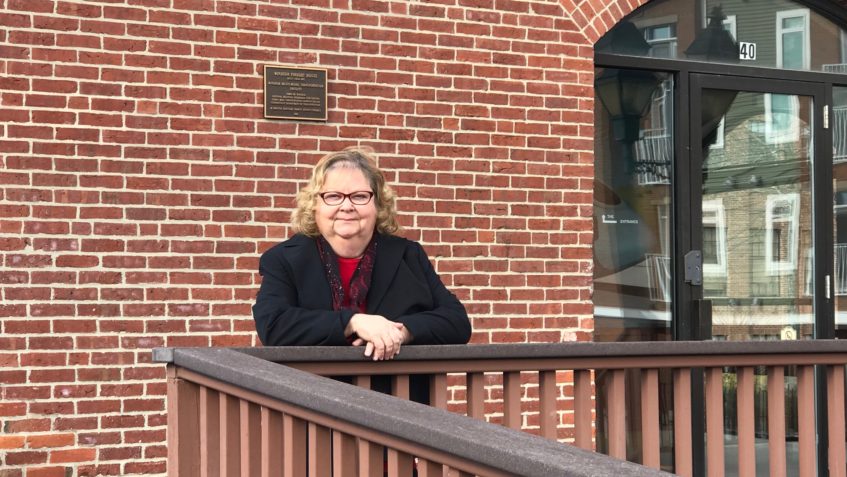 Peggy Sayers, who represented the district for 18 years, nominated Garibay. “I am so excited that Jane is our nominee,” Sayers said last night. “She is a tireless worker, knows and understands the needs of the district, and has a history of getting the job done.”

Born and raised in Windsor, Garibay lived and studied in Vermont and Mexico before returning to her hometown to raise her family. “We returned to Windsor because we love the small town feel and were impressed with the excellent services it provides residents.” Garibay said as she accepted her nomination, “I’ve made it a priority to fully understand the needs of people in Windsor and Windsor Locks and am looking forward to furthering their concerns.”

“Jane is a proven leader who is able to organize and motivate people to work towards a common goal.  She listens to others’ opinions and will collaborate with colleagues on both sides of the aisle, putting aside personal interests to do what is right for the citizens of Windsor and Windsor Locks.  I support Jane for State Rep.” said Jody Terranova in a speech seconding Garibay’s nomination. Windsor mayor Don Trinks added his support for Garibay. “Jane’s real world experience in her professional career where she works with all types of businesses in Connecticut as well as her history as an elected official as President of the Board of Education makes her the ideal candidate for this position.  She has extensive experience with budgeting, education issues, Transit Oriented Development, non profit foundations, unions and negotiating,” Mayor Trinks said in a statement last night.

Garibay prioritized the need to prepare future generations to work and thrive in Connecticut. “We need to ensure our education system sets our students on the path to long-term careers, integrating hands-on, real life training at every stage.” She also stressed the need to modernize Connecticut’s transportation system and to attract smart, transit-oriented development to the district. As the Executive Director of the Windsor Chamber of Commerce since 1999, Garibay has been focused on nurturing small businesses and fostering strong relationships between the businesses and the community.

Cindy Cooper, Chair of the Windsor Locks DTC said, “I fully support Jane’s efforts and wish her the grandest of victories. Her experience and ability to bring consensus will serve Windsor Locks and Windsor admirably.”

Garibay, who is participating in Connecticut’s Citizen’s Elections Program, has exceeded the threshold to qualify for her public financing grant. “I’ve been touched by the support I’ve received since announcing my run,” Garibay said. “We’re proud to say that we’ve raised over 200 contributions, and I’m looking forward to building on this grassroots support.”

“Jane has a record of commitment to improving the lives of all Windsor residents and has been a driving force behind the annual VOTE YES campaign to urge voter support for the town budget. I am confident that Jane will continue this high level of civic activism at the State legislature on behalf of both the Windsor and Windsor Locks communities,” said Timothy Curtis.

Garibay lives in Windsor center with her husband Bernardo and her niece Jenny. She looks forwards to running her campaign with honesty, integrity and common sense. Anyone who wishes to volunteer for her campaign can sign up at www.JaneGaribayForHouse.com